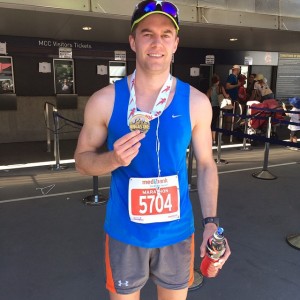 It’s just over a week now until some 10,000 runners converge on Melbourne’s CBD for the Melbourne Marathon Festival. With five races available on the day, the event caters for all fitness levels. I am running my second marathon, and while this information is targeted towards my fellow marathon competitors, it can also be applied to the shorter distance events.

Some runners may rotate between multiple pairs of shoes during their training program. A shoe that is appropriate for your foot type is important, but by now you will know what ‘feels best’ on your feet. Pick this shoe and stick with it!

The general life span of a shoe has an upper limit of 800 km. Personally, I like to have run at least 200 km in a shoe I am going to use on race day. Barring any manufacturing faults, it is too late to change now.

Collect your race pack on one of the allocated days leading up to October 19th and lay all of your race gear out the night before. It is important to consider all accessories including your race bib, sun glasses, a visor, body glide (or similar anti-chaff balms) , technical running socks, gels and an IPod (if you have trained listening to music). It is important that you do not include anything new that you haven’t trained with on your long runs! Now is also the time to think about where you are going to store your gels.

NB- Technical running socks are those that wick moisture away from the skin and have a finer knit fiber to minimize friction. Using these will decrease your chances of developing those dreaded blisters later in the race when your feet are perspiring and swollen.

The long range weather forecast for race day is looking good at a comfortable 23 degrees. However, if the recent warmer Melbourne weather is anything to go by, hydration leading up to the day will be vital! Hydration should commence at least three days before race day. The amount of water and electrolytes required will vary between individuals. As a general rule, two litres of water per day with the occasional Endura (or other electrolyte product) is a good guide.

Carb loading should also be considered 2-3 days before the event. Stick to simple carbs including breads, rice, pasta and potatoes. Remember, it is called carb loading not CRAP LOADING! Do not change your portion sizes and do not binge on junk food as this will leave you feeling heavy on race day.

In-race fueling is often very subjective and after experimenting during your long runs you should now know what your body does and doesn’t like. The key things to consider are the number of gels you are likely to require during the race. There is a scientific formula which can be used to calculate the required carbohydrate replenishment per kilo of body weight, but I will use my own weight and strategy as a simpler example.

On race day I expect to be weighing around 75-76 kgs. I will have a very small breakfast consisting of half a cup of oats and half a banana with skim milk. No more than 500 mls of water is required on race morning, anymore and you may need a toilet stop during the race.
I plan to consume one gel at the start line and wash it down with a small sip of water. If the weather is warm I plan to take a drink at each of the drink stations which are spaced every 3kms along the course. After the first 12kms I like to alternate between water and electrolytes at each drink station. I will take three gels along the course; roughly one per hour. For example, I will consume a gel after one hour (or 12-13kms), another after two hours (25-26kms) and then again at the 34km mark (I’ll need it to tackle the climb towards the shrine)!

The most important message here is to have a race plan and STICK TO IT! Do not get overcome with emotion and take off like a race horse weaving in and out of traffic. CONSERVE YOUR ENERGY EARLY! Do not zig-zag around people in the first 3-5kms and try to run the straightest possible lines from corner to corner. Last year I ran 42.6 kms (according to my garmin). This meant I ran a further 400m’s than the shortest possible on course route. This added some 2-3mins to my goal time.

During the first 10-12kms I suggest running just outside your planned race pace. This will best allow your body to utilize its fat stores and preserve valuable glycogen for later in the race.
Move up to your race pace during flatter sections of the course and be prepared for your splits to balloon out a little once you start the hill towards the shrine. Once you reach Domain road, the course is largely flat/ downhill so you’ll have plenty of time to make up any time – provided you have the energy left!

5. Recovery
You’ve done it! Enjoy the feeling of finishing a marathon and be proud of the hard work and sacrifice it took to get there!

Don’t forget to recover – this will reduce the number of days post-race where you need the kitchen bench to hold you up, or dread going to the toilet from fear of not being able to get back up! Take a foam roller with you and spend at least 10 minutes rolling out the major muscle groups after the race. I then suggest heading straight down to the bay and standing in chest deep water for two 20 minute cycles.
Be confident in your training and enjoy the ride. GOOD LUCK!