EDUCATING YOU HOW TO MOVE AND FEEL BETTER.

Welcome to Up & Running Podiatry

As a new patient to our clinic we want to ensure you “hit the ground running”. We have clinics in Elsternwick, Port Melbourne, and Williamstown, and the expertise to assist with all your lower limb pains and foot problems”

Gary has played football for many years at various standards, playing interstate and at VFL level. He now dedicates his time outside of work to his young family and triathlon. He is driven by progression and improvement. He recently qualified for the Ironman World Championships in Hawaii placing 2nd in his age group at the 2018 New Zealand Ironman. Gary understands the importance of patience and training smart, to achieve your goals.

Gary obtained a Bachelor of Podiatry at La Trobe University, completing his final clinical placement in London, gaining a broader perspective of Podiatric care and strengthening his treatment skills. Having over 9 years of clinical experience, Gary has a particular interest in sports podiatry, biomechanics and musculoskeletal therapy.

Matthew is a qualified running coach and has a strong running/ sporting background. He has completed an Ironman triathlon, an ultra marathon (100km) and several marathons. His passion for running and triathlon is evident in his interactions with his patients who share similar goals. He understands what it’s like to be injured and knows first hand why runners don’t like being told to “stop running”! He also played football and cricket at junior representative level.

Matt obtained a Bachelors of Podiatry degree from La Trobe University. He graduated with honours in the field of foot orthotics and foot plantar pressures. His research in this area enabled him to gain extensive knowledge of the mechanics by which orthotics influence foot posture and weight distribution beneath our feet.

Matt’s professional achievements include having co-chaired the Australian Podiatry Association Sports Special Interest Group. Through this network, he has established strong relationships with other sports based therapists from a variety of disciplines. 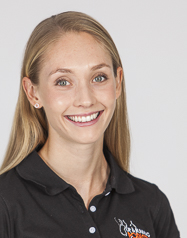 Madeleine joined Up and Running Podiatry with an elite athletics background and has represented Great Britain and Scotland in both cross-country and track and field. Her interest in Podiatry stems from her own experiences with various lower limb injuries which fuels her passion for treating both international and recreational athletes to help them return to full fitness.

Madeleine graduated from Queen Margaret University in Edinburgh with a first class BSc (Hons) in Podiatry and is currently studying a masters in the Theory of Podiatric Surgery. She has experience in the United Kingdom and Australia in both private and public health sectors.

Her key interests are in sports injuries, injury prevention/rehabilitation and footwear, specifically running shoes and the impact they have on lower limb biomechanics.

Madeleine is a dedicated and caring Podiatrist that treats a number of Podiatry conditions ranging from routine skin and nail care to orthotics and biomechanics in both children and elderly populations.

Personal Achievements and Interests.
– 2nd place Athletics Australia Nationals 1500m – 2019
– Represented Great Britain at the European cross country championships.
– Twice Scottish National senior 1500m champion.
– Maddie claims to have successfully stood up on a surfboard for more than a second..
– Enjoys travelling and has visited 20 different countries.
– Maddie is a self declared running shoe nerd, and has a pretty impressive collection. 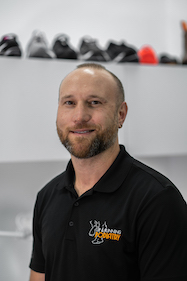 Alec’s professional interests include sports podiatry, minor surgery and paediatrics. He is a strong believer in orthotic therapy and is always keen to explore cutting-edge methods of preventing and managing injuries of the lower limb.

Alec travelled across the ditch to complete his Bachelor of Health Science in Podiatry at the Auckland University of Technology. He became interested in Podiatry through a long-term running injury of a family member and the range of podiatric treatments that were used to treat the complication.

Alec has a strong history in sport, having been a personal trainer for over a decade and playing rugby at a national level in the United Kingdom. A lifetime relationship with sport has helped him gain an understanding of the importance of stretching, strengthening, exercise technique and correct footwear.

In his spare time, Alec likes to keep fit through a dedication to gym and distance running. He has completed several half marathons and City to Surf competitions. He is also a qualified chef, and enjoys cooking all types of cuisine. 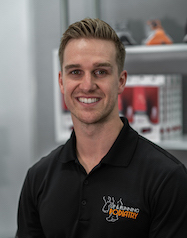 Having been an avid sportsman all his life and growing up playing sports such as football and basketball, Lachlan has had many injuries throughout his career. The impact of these injuries has led to his interest in focusing on sporting injuries and various musculoskeletal conditions of the lower limb and feet through correcting biomechanics.

He has worked with athletes with sporting injuries and implemented many other aspects of podiatry such as orthotic therapy, paediatrics, nail surgery, diabetes management and general care issues such as corns and callous.

He enjoys competitive sport and plays for his local football team where he is part of the leadership group. He also closely follows the NBA and the Melbourne Football Club in the AFL. He has a passion for learning about current trends and new information in the health and fitness industry, enjoys travelling and has been on various trips overseas.

Lachlan is very approachable and easy to talk to. He is always looking to improve his skills and loves a challenge. Lachlan is constantly asking questions and is happy to go well beyond for his clients. 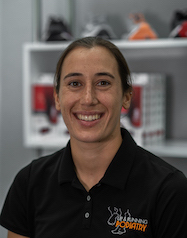 Grace is a VFLW athlete for Melbourne Football club and is currently training alongside their AFLW side. She has always grown up supporting Melbourne in the men’s AFL and is thrilled with the opportunity to represent the prestigious club in the women’s competition. Grace previously played for Collingwood Football club and was fortunate enough to Co-captain the VLFW side to a premiership in 2019.

Playing football at an elite level has provided her with an extensive insight into the vigorous training demands, injury prevention strategies and lower limb biomechanics of elite sport.

Grace’s motivation is to help individuals achieve their health and personal goals, regardless of their level of activity, sporting ability or age. She strives to become a strong advocate and mentor for women’s sport and to continue her leadership endeavours.

Grace has a special interest in lower limb and musculoskeletal pathologies such as Achilles tendinopathy, Plantar Fasciosis and ankle sprains. She has worked collaboratively in a diverse team of health professionals and has refined knowledge in all aspects of podiatry such as sport related injuries, running assessments, orthotic therapy, general skin and nail care, paediatrics and diabetes.

Having worked at a specialist running footwear store for 3 years, Grace has broad knowledge in a range of running footwear for a variety of individuals.
Grace also has a history in competitive sports such as tennis and soccer and also completed the Berlin Major Marathon in 2017. 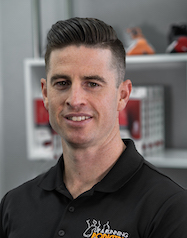 Matthew played football for many years including state and VFL level, finishing his time with local team De La Salle Old Collegians. He held leadership titles at all levels including several years as Captain of De La.

He sustained multiple lower limb injuries during this time and recovery from multiple surgeries has lead to an increased interest and passion for injury rehabilitation and return to run programming. Matt has himself recently completed a return to triathlon competition after significant knee surgeries.

Matt has completed a Bachelor of Science with Majors in Anatomy and Physiology via Monash University and also a Bachelor of Health Science and Masters of Podiatric Practice with Latrobe University.

Matt has worked for nine years in private practice and combined with his personal sporting experiences has developed a passion for Sports Podiatry and treatment of musculoskeletal injuries of the foot and ankle. 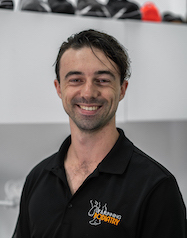 With a history in professional dance, years of soccer and a passion for healthcare, it is no wonder that Isaac endeavoured to become a podiatrist. Throughout his career as a professional dancer Isaac won multiple international medal for Australia, however he also witnessed an assortment of foot and ankle sports injuries during his career.
Dancing taught him about the importance of appropriate foot care, stretching and strength training, which he implements as the Australian International Dance Team’s Podiatrist.

This has equipped Isaac with experience treating an array of sports/foot related injuries including ankle pain, heel pain and bunion therapies, to ingrown nail pain and diabetes foot assessments.

After completing a Bachelor’s Degree in Science at Melbourne University Isaac’s curiosity for sports injury prevention continued and he became a surgical operating theatre technician. Through his time in the operating theatre he was taught all about foot and ankle injuries. This propelled Isaac into a career podiatry, completing a Masters of Podiatry Practise.

Isaac plans to further specialise as a Podiatric Surgeon, to which he is currently completing his Endorsed schedule medicines to combine with his podiatry treatment. His professional interests include paediatric foot pathologies and dancer foot/ ankle injuries.

Other interests of Isaac’s include going on camping adventures and exploring the outdoors with his trusty sidekick Holly the British bulldog. He also enjoys playing soccer in a local league on the weekend and showing off his disco dance moves whenever possible. 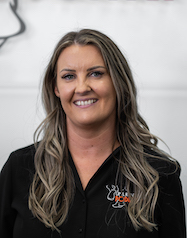 Amy joined Up & Running Podiatry in 2016 & is a friendly face around the clinic. She is committed to providing a friendly & comfortable environment for patients while still ensuring the efficient running of our practice. Amy takes pride in her amazing team and the positive culture around the clinic.

Prior to joining the team Amy has filled several working roles over the years while completing Cert III in Business Administration & a Diploma in Accounting which has provided her with a wealth of knowledge to manage our practice.

Amy feels working with Up & Running Podiatry has allowed her a happy medium of work/life balance while also being mum to her beautiful daughter. She loves to travel, spend time with her family & anything horse related. 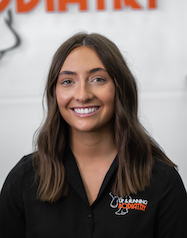 Larissa believes that providing a polite and friendly customer service to all patients is exceptionally important. She loves getting to know all of our patients and making their experience at Up and Running Podiatry as positive and welcoming as possible.

Our clients say that Larissa is a kind, self-motivated and resilient person.

Larissa is a keen netballer and also enjoys pilates and long walks along the beach in her spare time. Larissa is also currently studying a Bachelor of Psychological Science at Deakin University. 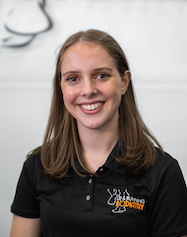 Growing up playing lacrosse and other sports Cassandra understands the value of communication, teamwork and hard work. She endeavours to create genuine connections with all patients in order to create a welcoming environment in our clinics.

At Up and Running we all have ‘trademarks’ that we work to uphold, and Cassandra has been described by the team as aspirational, driven and dependable.

Cassandra’s love for sports and fitness has led her to study anatomy at university with the goal of eventually studying allied health.